The last time I was at the club was back in May since school demanded almost all my time and when it didn’t frazzling my brain was the last thing I wanted to do. I’ve had been playing some 3/5 blitz and 10 minute games every day along with tactics for the last couple months which has clearly helped. My girlfriend and a friend of hers plays chess as well so that was another factor in chess becoming more relevant.  Having people to talk and play with makes anything better. As for my last two tournaments I went 1/3 and then 2/3 but the most recent was 2.5/3. A steady increase over time and really the first game I played I should have won since I had a winning position from the opening but playing over the board after so long took some getting used too. That game ended in a draw with my Knight forking the opponents King and passed pawn.

This game I was looking to win quickly and end the night. I played the Italian looking for an attack on the f7 pawn, usually I would play a solid d4 Queen’s gambit instead. I kept the option of castling short or long open but after Black played Bg4 pinning the Knight as normal I played h3 and g4 to kick the Bishop around. I then proceeded with an attack on the c5 Bishop with c3 and b4, it was an all out assault from both side. My King stayed in the middle surrounded by defenders while took Black’s castling rights away and battered the already weakened King side. It lead to a double Rook mate with the Black King on h5.

It was my second night at the Parma Chess Club since I had taken a break from any over the board play due to school and it feels good to be back there. I made it a point of the night to make some contact and connect with some of the others, usually it’s focused chess playing and not much else as I’ve tried to work on my play. I had 3 games tonight and walked out with 2/3 points which was nice, the first against a younger opponent who really knew how to use light squared weaknesses, the second was a older lady who likes to play reckless with a King’s Gambit style (she knows how to use it) and the last was an older man who played pretty quickly considering I like to play 5 minute blitz.

I saw some familiar faces there and a bunch of new ones who I’d like to meet and at some point in the night I realized that this place is exactly where I belong. It’s a pretty uncommon occurrence to find something or somewhere which you absolutely look forward to being a part of. The people I played tonight I will likely be paired with for a little while as my rating shifts upwards into the next bracket. Playing someone over the board multiple times definitely tells more about them then if you were just having a conversation, the post game analysis and the discussion of different ideas coming together is a great thing to be a part of. Over time I’ll showcase some of the games played by them and write a little about each person with a goal to capture just how unique and diverse the club is.

Now without further ado, here is a game from tonight. The position below is where the critical point starts to emerge and the f6 pawn becomes the target of a double attack and the Knight on c6 is pinned to the Rook. It started off as a Queens Gambit Marshall Defense, my most study and comfortable position. I was more aggressive in this game since the previous 2 of the night which I had to fight back for any control after playing solid but reactive moves. I traded Queens early which you usually don’t do when being aggressive but it pulled the King out and allowed for tempo and position to be gained while the King retreated. It ended with a piece sacrifice for mate that I though looked pleasing. 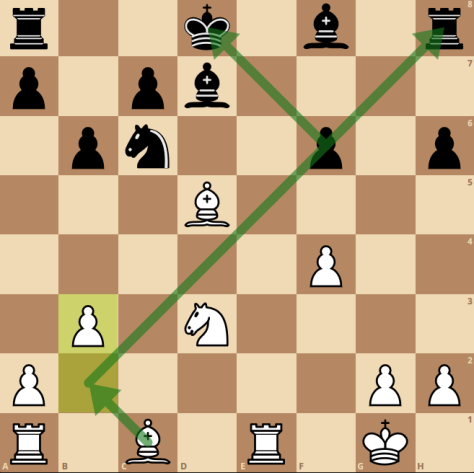